I really like Monsterpocalypse. There’s a lot to like about throwing an opposing monster into a building, or slamming him across the board. The strategy is quite a bit deeper than any other collectible game that I’ve seen, and yet they’ve made it so that force selection isn’t the whole game.

The minis are nice sculpts. Privateer Press used some of their long standing sculptors, and it shows. Sure, they’re not as detailed as their pewter sculpts for Warmachine and Hordes, but they’re quite nice. The only real trouble is, they’re all already painted. To me, that means that I’ve got some repainting to do.

Here is my Ultra Rakadon. This is the ultra form, and that means that he powers up to turn into a black and white movie monster.

I painted him in grayscale to make him look more like an old movie monster from one of the many dinosaur eats Tokyo films. I was a little surprised at just how much he ended up looking like a Legion of Everblight warbeast, but I still think he came out quite nice.

I used four paints on this mini: black, white, a neutral gray and a cool gray. I used the cooler 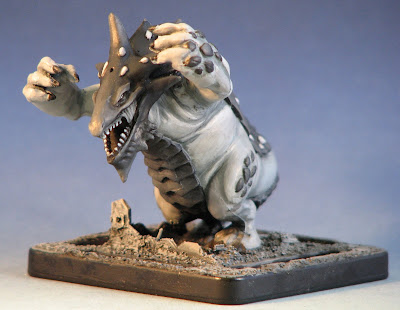 color after watching a film or two in which the black and white colors seemed just a little colder than neutral (that will depend on the transfer, or the age of your film strip). Altogether, I’m pleased with the results.