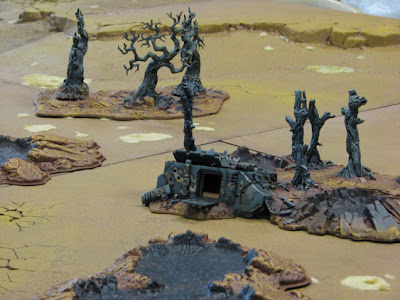 I recently got a commission to paint up the GW gaming table and some terrain pieces to go with it. The table is made up of 2×2 segments, making the whole table six feet by four feet. So, it is pretty big.

The strangest thing about GW’s table is their use of skulls. Scattered about the whole thing, there are some dried bones, suggesting that perhaps this is some ancient battleground. But then, there are some sections of earth that have been upturned to reveal hundreds of skulls, and not other bones. This board could otherwise be used to represent almost any Warhammer, or Warhammer 40k environment (at least natural ones) but the skulls designate that it must be some Khornate Daemon world.

My client, who does not play Khorne, decided that that was very cheesey, and wanted me to cover up the skulls with something. I considered using some kind of water, and make the table into a swampland, or perhaps I could turn it into a frozen lake on an ice world. In the end, I made the table into a deserty badlands, and sculpted broken earth out of green and grey stuff. 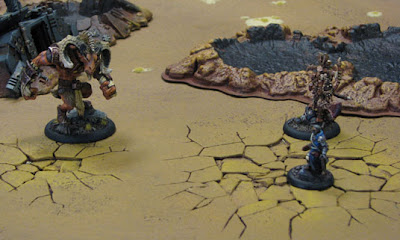 Those sections of broken earth used to be filled with skulls.

Aside from that, I think my favorite part of the project was a destroyed rhino that I got to paint. I happened to know that a friend of my client plays a grey space marine force, so I couldn’t resist putting it in as a cameo on the battlefield. 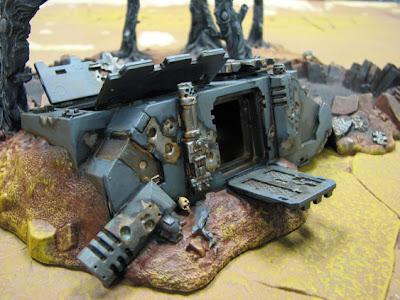 And battle damage is pretty much always a blast to paint. Since the rhino is as battered as it is, it really doens’t take quite as detailed a job to paint it up, although this particular terrian base has quite a bit more detail on it than is standard.

Overall, this was quite a nice job, and I’d definitely do it again.