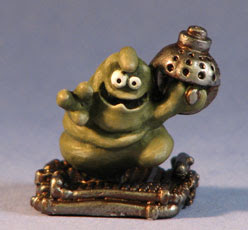 Garden Ninja is proud to announce a new licensed miniature for sale.

Sergeant Schlock was sculpted by Melissa Mayhew and inspired by Schlock Mercenary by Howard Tayler. He’s available hand painted or with a patina finish, or as a plain pewter mini if you’d like to paint him yourself.

As of this morning, we only have about 40 left in this run, so buy now to avoid waiting for the reorder.