So, a little while ago, I posted that Alliance Distribution had given us confirmation on a new Hordes faction- the Farrow.

At that point, all the solid info that we had were the names of the different characters (a new Minion Warlock named Lord Carver doesn’t necessarily mean that he’s a Farrow). He was coming out with a war-pig, but that still isn’t complete confirmation.

Well, we now have absolute confirmation. Here is some Lord Carver concept art. We hope the mini looks as good as this.

I honestly am wondering if he’ll fit on a small base. 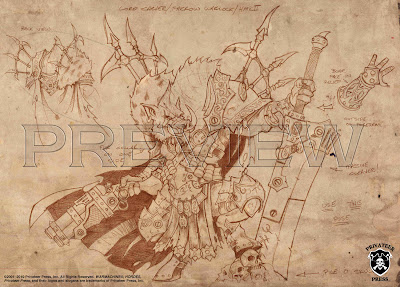 I guess there was one other thing that I had been worried about. With full minion warlocks (rather than Lesser ones) Privateer really needs to be out-doing the sculpts on their Lessers. And they put the bar up pretty high with Wrong Eye and Snapjaw winning Tabletop Gaming New’s reader’s choice for mini of the year, and Rorsh and Brine are just some of my very favorite sculpts.