The wonders of Scale Creep

Have you ever gotten out some of those older minis and set them next to a newer one? Some of the older miniatures lines have been around for a while and gone through some big changes.

Once upon a time, 25mm was the standard size. You’ll still find some older Sandra Garrity minis in 25mm from Reaper.

When people started making minis bigger than that, the standard became 28mm (or ‘heroic’ scale) and that lasted for a little while. When sculptors exaggerated 28 mm, we invented a thing called 30mm and even a 32mm for the exaggerations of the 30mm size.

Whatever anyone says, 32mm is pretty much the standard size right now, even though many companies claim 30mm and some- like Games Workshop- still claim that their minis are 28mm mini. But how serious can they be about it when they wrote scale creep into the Ork fluff.

One of my clients recently had me paint up a classic Ogryn mini to match a group. After he saw the minis together, he decided that the only way to pull this off is if an Ogryn adolescent were joining his seniors on the battlefield.

Here is a new Ogryn next to the old one. The white stripe on the smaller ogryn’s helmet is to show that he is a rookie conscript. 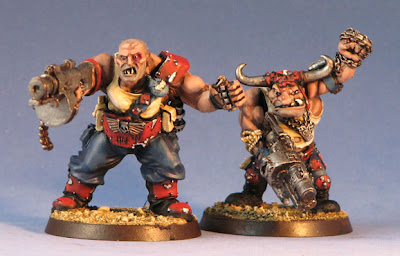