There was quite the showing at the Wyrd Miniatures booth at Gencon.

For starters, they had quite a few new releases for Malifaux, including two Gencon exclusive miniatures (one is an alternate nurse, another is an oversized alternate version of an upcoming master). The new book, Rising Powers, does quite a bit to deepen the game of Malifaux, including introducing Henchmen, and a slew of new scenarios to play (along with some adjustments to older scenarios).

They also had something on display that looked eerily like their new Terraclips game tiles. I was pleased when I found that this was made from a fairly sturdy card stock (it wouldn’t just break after a couple games) but the bits didn’t fit together quite right.

Then again, if you asked anyone from Wyrd or from World Works about it, they’d give you quite the rant about how the manufacturer used a thinner card stock and glossy finish, which just won’t do. They’ll be releasing those sometime later.

They still used them for all of Wyrd’s tournaments and game tables, so there’s something that worked out.

Ok, but here’s the big news from Wyrd. They’re working on a new game called “Puppet Wars.” All we currently know about this game is that it will use the new Puppet Deck of cards (which works just fine for Malifaux too) and will features this creepy and cute set of miniatures: 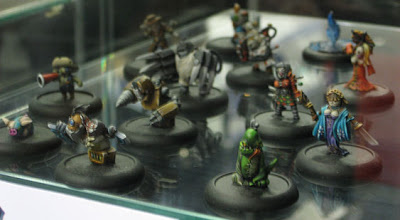 I have no idea if the rules are even finalized yet, and we really don’t know if it will be in any way compatible with Malifaux. From the minis, it looks like they’re starting up something pretty outstanding here.

Wyrd is still setting a high standard for creepiness in minis. More power to them, I say.