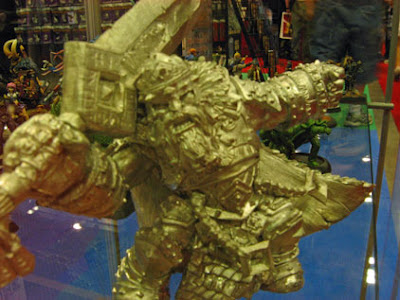 The guys at Reaper are really nice fellows.

Their booth featured a Con exclusive Sophie (as it always does) along with some prereleases on new chibi-mouse warriors that they’ll be releasing soon.

In their case, they had a few upcoming miniatures that were featured in the Warlord expansion, The Savage North. Some were greens, some were pewter, and all of them looked great.

Now, I’m all kinds of in favor of getting a Frost Giant faction for Warlord, and I don’t even play their game. Man, but those minis are fun to paint.

There were people playing Warlord in the tabletop areas too, and altogether that would have been enough for most miniatures companies. But Reaper goes just a little bit further. 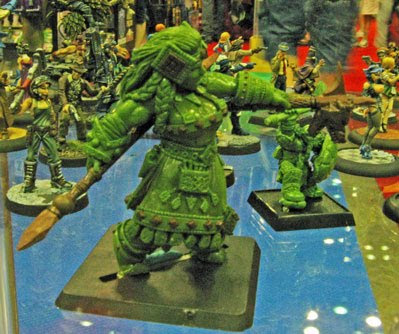 Reaper had a table set up for their sculptors to sit and demonstrate their work to con goers. I had a chance to talk to plenty of industry sculptors, including Bobby Jackson, Patrick Keith (who is responsible for the Dwarf/Giant on the left) and Drew Williams. Great guys, and all of them were eager to share their secrets.

One thing that makes Reaper such a great company, though is that I’m not sure that Drew even does sculpting for them.

Reaper has really demonstrated that their dedication is primarily to the hobby, rather than to themselves. They’re really dedicated to expanding the hobby in all directions.

They provided quite a bit of support for the Gencon open miniatures painting and sculpting competitions, as well as several painting events.

Of course, they had their full line of miniatures and paints available. But since they’re Reaper, you can always find them at your local game store. Of course, at the con, there were people acting the part of the figure finder, and that was pretty cool to see.