It seems that Privateer Press has become the big dog at Gencon. Their booth was always full, their tables always had plenty of players, and their staff always had someone distracting them with questions.

Privateer Press launched quite a few things at Gencon this year. First and foremost, the newest

of the Extreme Sculpts, the inestimable Titan Gladiator Extreme was first unveiled online before the release at Gencon. We all looked at that monstrosity of a mini (Jason Hendricks has really outdone himself with this one, man that thing is crazy).

Those who picked one up at the con will have noticed a couple things bout it. First off, it really is as detailed in person as it looked on the web, it absolutely doesn’t fit onto its base, and perhaps most astonishingly, it is made from gray resin.

Yes, this mini is the first time we’ve received any kind of resin from Privateer Press. The fact that they did not reveal that online beforehand makes me think that they must have wanted to do what they never had the chance to do with the plastic minis- reveal the mini first and only after everyone is sure they love it, reveal the material it is made from.

Of course, resin is pretty commonly accepted as a better material for minis than normal plastic- and especially with some of the strides forward it has been taking recently, we’ve been seeing more and more resin minis. And with this mini looking so nice, I suspect we won’t be seeing any more metal extreme sculpts soon.

Another part of the new releases they had were the new Warmachine Battleboxes. Meant as a $50 starter box, these were announced as completely plastic kits – contradicting earlier statements about how PP was going to keep their characters and warcasters in metal. Well, it turns out that the warcasters included in the box sets were all metal minis. 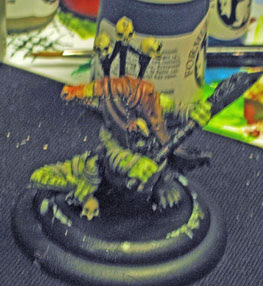 For those of you who took the time to look, Matt DePetrio was painting up a new minion warlock- this one was a Gatorman. I got a pretty poor snapshot of the unfinished mini, but the style is nice.

Of course, we have no idea how he plays, but he’s definitely increased my interest in the upcoming minions faction book.

Oh, and today, you can just check over at Privateer Press’ website to see a 360 shot of the finished mini (also, with better photography). 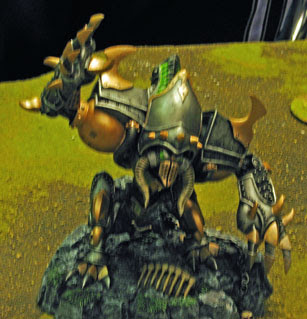 Another interesting even they had was their Iron Arena. Meant to reward players who spend most of their Gencon time exploring Privateer Press events, the Iron Arena gave players points for games, and rewards for playing (if you played enough games, you even got an extreme sculpt of your choosing).

One of the best parts though were the crazy characterful scenarios that they had set up on their tables. For example, you could set up a 100 point- two warcaster force against this monstrosity of a warjack. He’s huge, crazy powerful and can usually defeat a very large warmachine force without much trouble.

I heard that there was one Cryx player who beat him, but I only saw the mammoth ‘jack win.

Of course, my favorite PP event was their painting competition, but I’ll have to leave off blogging that until tomorrow. 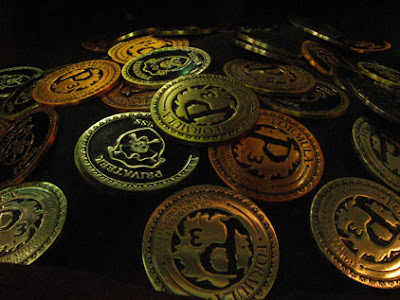