Minis in the Movies A lot of films these days are adaptations of other properties, but one of the things we’re seeing right now is something strange and new- adaptations of miniatures games into film.

Currently, you’ll find a little buzz online about the Ultramarines film, basically because Dan Abnette wants to keep you informed (you can even find a teaser trailer).

Anyway, I think it is completely up in the air as to whether or not this semi-small project about the Warhammer 40,000 universe will be any good or not. I’m interested, mind, but it could easily end up looking like Mutant Chronicles in the end.

On the other hand, it looks like there’s actually a little bit of work going into the Monsterpocalypse film. There is confirmation that Tim Burton is actually involved in the project, and likely going to direct it. 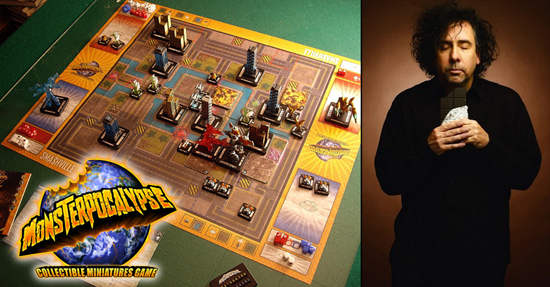 This isn’t 100% confirmation that we’ll ever see a Monpoc film from Tim Burton. I mean, Tim Burton got payed a million dollars for a Superman film way before Superman Returns. But Burton’s involvement does mean that if it does happen, it will probably not look like the Dungeons and Dragons movie.

All of this talk about a Monpoc film made me start thinking. Why on earth would Burton want to adapt that material?

I mean to say, Monpoc has less of a story or even a setting than most miniatures games. I mean, the fluff is 100% an excuse for giant monsters to throw one another into skyescrapers. That’s not a bad thing for the game, since it just accepts that that is what it is, and presents it as such.

Ultimately, Monpoc is a kind of weird to adapt because it is based on a genre of old cheesy movies. And that’s probably what attracted Burton to begin with.

Tim Burton has a sort of fetish for old cheesy science fiction films. He’s thrown in small tributes to them in many of his films, most notably Mars Attacks. In a Monpoc film, what we’re most likely to see is a similar tribute to the Godzilla franchise.

And that can be cool.