Well, there was quite a bit of Warmachine stuff going on at PAX. The biggest part of that, of course, was the new Retribution force. Privateer Press actually sold out of the new plastic myrmidon jacks, or else I’d be overlooking them right now.

But there’s a whole lot of Retribution stuff out there. The forums have that area really well covered.

There was really only one mini in their case that they hadn’t already previewed. Here she is: 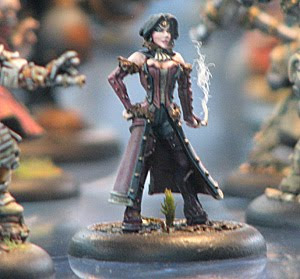 From her placement in the case, and her outfit, she is clearly a mercenary of some sort. As for what sort, well… we don’t know anything for sure. I don’t remember who, but someone told me that she’s Llaelese, so that means that the Highborn Covenant will have a new solo exclusive to their contract. Otherwise, I think she’s dressed a bit like a pirate, but who knows?

Another interesting thing they had at PAX was the Mark II quickstart rules. These include the finalized cards for the four battle boxes. There have been a few changes since the massive field test back in April.

The biggest change is that Denegra has lost Dark Seduction entirely. It has been replaced by a strange spell called Influence that does something similar but in the opposite way. For 1 focus point, Denegra can now take control of a non-warcaster/warlock warrior model and make one attack with it. I can see some use in spamming this spell to make the back ranks of the Iron Fang Pikemen kill off the front ranks, but I’m still going to miss the longshot game-breaking ability to take over an enemy’s cavalry unit.

Other than that, these cards don’t look like they’ve got a lot of alterations to them. The defiler is still weighing in at a hefty 5 points, but has a spray attack, Sorscha’s Icy Gaze does not freeze enemies that are immune to cold (from the box sets, that’s just Sorscha).