A look at Arcane Legions 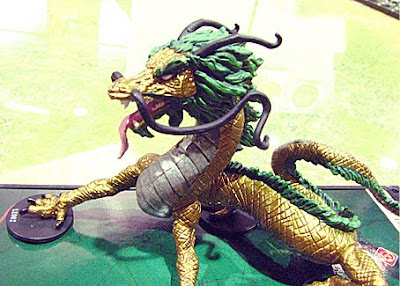 Also at PAX, there was a lot of hubub around the Arcane Legions booth. This game is some kind of semi-collectible, semi-prepainted miniatures game.

Semi-collectible because, from what I hear, it just isn’t that hard to find anything in particular. You can buy a random box of minis for your faction rather than having to collect everything together, and no units are particularly rare.

Semi-prepainted because the plastic minis are sometimes prepainted- a lot of the troopers come out of the box on a sprue (sometimes with colorful shields that need to be attached). This makes the painted characters and elite units stand out a little- that is, if you aren’t painting the troopers yourself.

The game itself is a regimental combat game, streamlined and a little elegant. All units use the same size base, which has a lot of slots drilled into it for the minis to stand on. Each unit comes with what looked to me like a sticker that fits over the base itself. The sticker has the statline for a mini standing in each individual slot on it (shown in dice- red dice for attack, white for defense, and blue for ranged attack). The interesting part is that the different slots add very differnt things to the regiment. For example, the slots towards the back might add defense dice- so if your unit decides to reform to put more models towards the back, then you are actually putting them into a defensive formation.

A nice, simple yet elegant system. 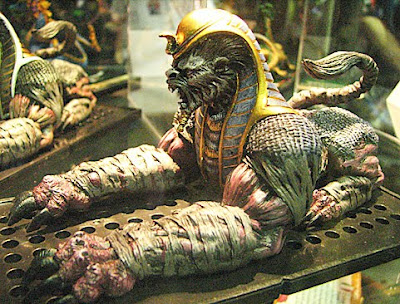 Here is a sphinx that doesn’t have the sticker on his base yet. I’m pretty sure he was a preview, and his statline might not be fixed yet. Large monsters like this take up the whole base that would normally have a bunch of cavalry or infantry on it.

So, now for the craziness. According to the people I spoke with, it is possible for you to make custom units through a program they have online. That’s nothing new, but with Arcane Legions, the units you make are 100% tournament legal.

I’m not quite sure how to take that. It would be quite a task to make sure that there’s no way to abuse the system, but with a system this simple, it might just be possible. I think we’ll have to wait and see if there’s some special rule that finds its way onto every custom unit, or if they’ve balanced it enough that a force without any custom units can take on a fully custom force.