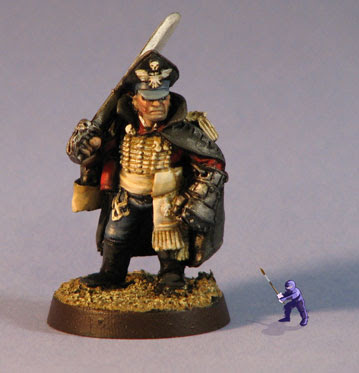 The face is an enormous part of painting the miniature. Our eyes are naturally drawn to the face, it is the most natural center of interest on almost any miniature. So it is worth going the extra mile and making the faces stand out.

The problem with painting human faces is that we all know too much about what they should look like. On orks, trolls, undead or some other kind of non-human entity, we have a lot more leeway than on a human’s face. We all see too many humans, and we look at their faces a lot, so we can perceive if something is amiss even when we can’t point out what it is.

There are a few tricks to getting faces done right, and it can mostly be broken down into separate elements and tricks.

First off, it is important to get the eyes right. There are hundreds of tutorials on how to paint eyes, so I don’t think I need to go into that right now. Find a method that works for you. I would recommend this method from Reaper, but that’s far from the only way to go.

Just one note, I often exaggerate the eyes on a mini a little. If done right, it makes the eyes pop out, and the face can stand out from a distance.

Here’s an example face, blown up so we can see exactly how he’s composed: 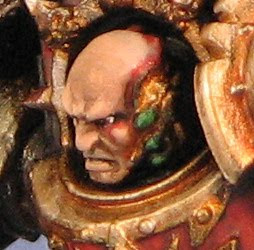 One kind of detailing that I threw onto this mini is the red on his face. What I did was thin down a cadmium red paint and use it like an ink, only applying it where I wanted. On this mini, I put red next to the interface with the mechanical parts, and I added some below his eyes. This adds to his character quite a bit, making this chaos lord look a little sleepless.

Other places to add red include scars (as the commissar above) the ears (the mini will look more angry) or the nose (for more drunk minis).

Something else to note about this face is the five o’clock shadow. I painted this on after painting up the face in flesh tones by mixing my base flesh color with a little gray paint. The shadow can be expressed in a lot of different ways depending on the amount of gray you put into the paint, ranging from “I shaved this morning” and “I’ve forgotten what a razor looks like.” This one is somewhere between the extremes.

Interestingly, I have discovered that sometimes it is worth painting on a shadow that is almost imperceptible. It makes the face look more real, even though a viewer cannot tell why. We really do expect to see things like this when we look at faces, so it is troubling when it is missing.

For comparison, here is a mini whose face is not exaggerated. It is good to note that I picked out the eyebrows on this mini, whereas on the exaggerated face, I left them alone. Too much eyebrow with the large eyes I had painted can make a mini look a little like a muppet. Otherwise, all of the same applications of red or gray apply: 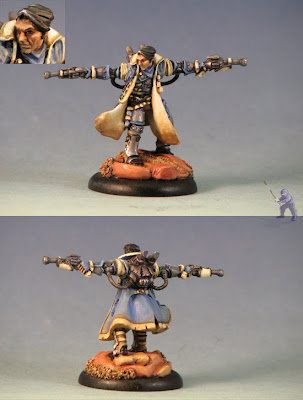