It is a good day for crazy minis

Well, today we’ve just had some news about some outstanding upcoming miniatures. Man, sometimes these just make me so excited. 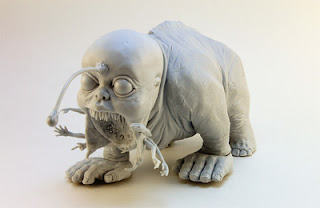 The first one is from Kingdom Death and he’s called the Gorm. He’s a rather large, fully resin miniature who is creepy as all hell and just opened up for pre-orders.

He’s also Kingdom Death’s first foray into the world of larger miniatures- and I wonder what else they might have in store.

You can have a look at him from different angles too. This guy is very creepy.

The other piece of news today is that Privateer Press is following up their promise of a new Farrow faction with a great steam powered cyborg giant pig.

Really, what’s not to love about that?

It seems that the Farrow faction might be following in the footsteps of their creator and completely raping nature to create crazy warpigs.

This mini is called a War Hog, and you should probably check out the 360 view of him at Privateer Press’ gallery.

There, you will see that he actually has a boiler in his back. This is a steam powered pig.